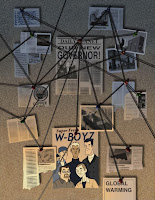 So, as usual, Gordon and I are thinking about the same thoughts across the pond, though perhaps coming to different conclusions (don’t worry, I bought the Cupcake wine today so I’ll be safe during the latest snowocalypse). Today he’s pondering The Limits of Visualisation: Why You Still Need Magic. A lot has been made of The Secret‘s many flaws and issues. As Kathy Griffin said when her assistants made focus boards and then attributed her recent uprising in success to said boards, “I’m so sure it was the two of you and your Secret boards that did this, not, like, my many years of constant work.” So besides taking away that you should never get into a sweat lodge with these people, as Gordon said, visualization is not enough.

So don’t do that. Instead, as Gordon advises in a previous post, create a success map.

Or as I call it, a serial killer board. I watch *a lot* of crime procedurals and inevitably, a serial killer has a board that looks like the picture I have in this entry. At first, Jow desperately tried to get me to stop calling it that. But he eventually succumbed to my irrefutable logic. A serial killer, at least a tv fictional serial killer, has a Miss Martha level of organization and attention to detail. A tv serial killer takes a long time to catch (usually a whole season at least) by a crack team of one of the best groups of CSI agents/detectives/forensic anthropologists that can usually solve a case in about 35 minutes but s/he manages to stumps them for 25 episodes and generally can even up the ante by becoming personal and killing something that this said team loves and *still* not get caught for 25 episodes because of their drive to succeed and attention to detail. This fictional serial killer has an implementable long term plan. Is that or is that not the point of a focus board/success map?

Now, I am definitely not telling you to become real life serial killers. Real life serial killers aren’t anywhere near as fun or cool as the fictional ones because of the whole morality/hurting people/having massive psychological issues/winding up with a needle in your arm and the long sleep issues. But a fictional serial killer is written by a team of writers, very carefully so as (if written correctly and no one is asleep on the job/phoning it in/being super half assed about it) there are no plot holes for the show.

And that is actually the point, Charmers. There should be no plot holes in your magic. There should be measurable goals, magical work and mundane work to make sure that your magic is doing what it’s supposed to be doing. If it’s not, you need to re-evaluate what you were doing and who you were working with and if your goals were reasonable and achievable magically and mundanely.

A focus board is not going to do this for you.

But what it *will* do is keep your eye on the prize and in my opinion, that’s the real purpose in having one. You might be easily distracted like myself and get sidetracked from all the important shit you’re actually supposed to be doing and instead watching back to back episodes of Bridezillas in your pajamas and/or drinking French Greyhounds and getting sucked into Facebook for nine million hours or maybe you’re reading too many self improvement books and can no longer sleep like a grown human adult. It’s easy to get completely and utterly off track.

That’s why you need a serial killer board.

1. First, think about what you’re trying to accomplish in your life. For me I started by thinking of words because my brain sees words before pictures. My words are: Aspire, Create, Live, Serenity, Serve and Want.

2. Now find pictures that you feel are good representations of what you’re trying to accomplish. Mine are:

Aspire: Joan Holloway (Mad Men)(she is curvaceous like whoa and Queen of the Secretaries), black and white picture of the Eiffel Tower (to remember to find my inner french chick) and Erzulie’s symbol (to remember to drop it like it’s hot)

Create: Typewriter (i is a riter noaw), a spinning wheel (I spin yarn as part of my income) and Mnemosyne (she’s the mother of the Muses).

Live: Rolling pin and cookies (making things from scratch), a bedroom from anthrologie (keep my house in a way that I like) and a champagne cork (enjoy the good things in life)

Serve: Parvati and Shiva (remember to be a divine housewife and be present romantically) and Leigh from Secretary (draw your own conclusions, Charmers)

Want: Bank vault (to have money saved), a Saab convertible (I really want my next car to be a convertible and I could afford a used Saab and they’re supposed to not be horrific to work on or horrifically expensive to repair and they’re safe), passport (to keep traveling)

3. Get a smallish cork board and push pins. Pick a font if you want to print words, I find Fiolex Girls conveys the fictional serial killer intensity I’m trying to go for. I also used good quality heavy paper for my pictures and scrapbooking scissors to cut out my pictures so they had pretty edges.

4. Arrange. This is an awesome meditative stage where you get to play god of your own life and arrange all the pictures in a way that makes sense to you. I grouped my pictures according to each word.

5. The finishing touch. All serial killer boards have yarn connecting pictures and articles together. To be completely frank, I have no idea why that is. It looks cool? But magically speaking, it’s useful as weaving the yarn through the push pins and connecting them together can be a magical act if you use your intent. You should also think carefully about which pin to connect to which pin. For me, It was even more magical because I got to use the (pink) yarn that I had spun myself for this.

6. Place in a position you will often see. If you’re constantly glancing at it for a quick second at a time, I think then putting the pieces together internally is more of a subconscious versus conscious act. Mine is in my office, just out of direct eyesight which helps too. Plus when I get bored working, I tend to look around a lot so that adds to the occasionally seeing it but seeing it often aspect.