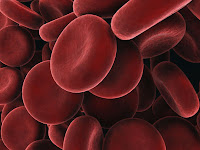 As we know, I can’t be bothered to read a lot of heavily theory based books because I get bored and tap out. So don’t expect a well referenced article here, just my personal experience.

Starting out as a Dianic Wiccan, the blood of choice to focus on was of course menstrual. While myself and the younger prissier witches among us turned our noses up at the idea of doing rituals involving menstrual blood, we were regaled nonetheless about the ye olde 70’s by the older witches and their menstrual blood rituals.

As I aged some, I was less prissy about it and invested in a diva cup which I use on the regular, to the dismay of the triumverte. The cup was handy in also being able to neatly pour menstrual blood into my watering can into my garden. When I had my little container garden (I do have plans to resume that next year), I did feel a closer connection to the land. It made me feel like I was doing something sacred, something important by tending to my tiny pots (complete with tiny garden gnome) in my bare feet on my balcony. Watering them with my blood strengthened that bond too I suppose. It didn’t feel all rrrrrrrrrrrrrrrrrgh POWERFUL!!!!!!!1111!!! It felt nice. I don’t know how else to describe it. Nice. Peaceful. I suppose theoretically, I could have used my garden to bind everyone who stepped foot in my house to me in some kind of crazy Sicilian Marinara Vaulderie Ritae, but that wasn’t really my intent. I liked feeling like something that came from me could grow something else, it made me feel linked to the land strongly and it felt, I dunno, v. circle of life somehow.

Of course, let’s be real here. We all went through a phase where we wanted to be taken supersrsly in the magical community and to prove how badass we were. What’s more bad ass to someone likely under the age of 25? Blood magic. Menstrual blood is a good starting place if you’re a lady-type, but really it’s not like you have to work for it, it just happens. No, there needs to be stabbity and teeth gnashing, and I don’t know, whatever other tough poses you undergo when you get your finger pricked at the doctor’s office. Because! It’s not like it’s all that easy for many of us to get serious needles. Lancets, sure. Needles, not so much. And if you’re cutting yourself with a knife, well, that’s a problem in most cases that many people seek help for. So, you know, once you realize that finger pricking is likely to be the extent of your practice and that your super manly six year old cousin Andy can handle it with a Hello Kitty bandaid and a lollipop, you need to stop and ask yourself what you’re hoping to get out of it.

At the time when I first started investigating, the general view of the more . . .god, is White Lighter a nice term? I mean it nicely, I don’t know why people get all bitchy to them, they make all of us in the occult community look at least relatable to non-Pagan/Occultist/Whatever kind of special snowflake you are, most of us at least started there. When Mothra is feeling benevolent, she calls me a Wiccan instead of a godless atheist so I pretty much take it and like it. Anyway! WL’ers tended to see using blood magic as an atom bomb. Which. . . .I suppose if you’re sacrificing maidens in your backyard, it would be.

If animals are killed in ritual, it’s kinder and more gentle than the American meat industry and the animal is eaten and its parts are used, so I have no qualm there. I have not as yet participated in any kind of animal sacrifice rite, but I would like to fish and hunt my way up the food chain. I figure it’s the least I can do with a quasi-Shamanic background. It’s all well and good to eat meat that comes wrapped all nice and neat, it’s another to do the work. I want to make sure I can handle the process, if I can’t I should be a vegetarian in my opinion. Luckily, my gf grew up on a farm so we have plans eventually in that general direction.

But what about the finger prick of blood? Well, ADF at one point STRONGLY discouraged it. My grove being the backwater snake handlers of the tradition of course rushed to make pamphlets discussing how we are strongly discouraged (but not forbidden) to do blood sacrifice or juggle porcupines (the genesis there is a little fuzzy). Now it seems we’re forbidden to do it in ritual setting at least.

So when to use it? Okay, so it’s not the toughest expression of sacrifice, and there are other expressions of sacrifice (hard work, things made from your hands, wine, etc.) but it is still an expression of sacrifice. You still have to take that little tack like needle and jam it into your finger. It still hurts. It’s still a tiny piece of your life force, something that is uniquely you. It’s still one of the preferred personal concerns in hoodoo. If you can manage to contain yourself from using it for everythang and keep it as a sometimes food (like cursing), that keeps it as a special kind of sacrifice. For me, I only use it when I really, really want something. I got my wasband housing many many many moons ago, and I got myself the perfect rabbit burrow condo using it. I can count on one handish the amount of times I’ve used it, I only use it when I am v. serious about something or making a v. serious offering to the land or a deity.

Some deities do like it, but if you make that an every day food for them, be prepared to go through a lot of needles and be prepared for them to not like the idea of you breaking up with them and taking away your delicious delicious life essence. Some deities really don’t like it at all, so do your homework before starting a teeny dollhouse sized CSI blood spatter for your gods.